David Platt famously said, “Orphans are easier to ignore before you know their names; but once you know, everything changes.” People like you took interest in a boy named Andrew. Here’s what happened next.

Our team in Liberia writes—

Heartbreakingly, his parents had died just one week apart, making him one of Liberia’s 184,000 orphans.

If that wasn’t hard enough, Andrew struggled to walk due to malnourishment, so we immediately rushed him to the hospital when he arrived in our care.

According to UNICEF, the early years for children in Liberia are at the heart of their life chances. These years are considered the ‘make or break’ years when kids will get what they need to grow and thrive, or they’ll face the type of adverse circumstances that affect them—physically and mentally—for life.

One of the worst barriers: malnutrition.

In close to half of all child deaths in Liberia, malnutrition is a major culprit.

Andrew stayed in the hospital for 3 weeks, but by the grace of God, he recovered and came back to stay with us.

Andrew became a ‘big brother’ to the kids. 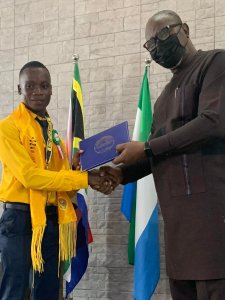 Our group of 25 kids—including Andrew—grew to 40 kids, and we became like one, big family.

The kids in our care range in age from 5 to 20. We provide food, clothing, education, and medical care for each child who lives here. Additionally, all of our kids attend church on a regular basis, and many of the older ones are directly involved in church activities.

As we say often, giving children and young adults the chance to learn remains one of the most urgent priorities in Liberia. So Andrew started kindergarten at Lifesong School as soon as he was able.

He graduated from high school in January of this year.

He is currently enrolled in the Lifesong Vocational College, studying electricity.

His desire is to be a pastor and an electrician. And we believe his future is bright.

For now, he sings in the choir at Compassion Center and is involved with youth ministry as well. He has a genuine interest in seeing others come to know and love Jesus Christ just as he does.

He—and we—are grateful to God for people like you who are part of his story. God uses your prayers and gifts to write powerful stories of redemption like this one.

Andrew looks forward to returning to his village one day in order to share the Gospel. We look forward to cheering him on.

Give a student in Liberia the life-changing gift of care and education.