Have you ever walked through something frustrating, only to realize it led to amazing things?

As followers of Jesus, we know this isn’t just chance. We learn in Romans: “…for those who love God all things work together for good, for those who are called according to his purpose.”

Sometimes the good is obvious. Other times, the good may take years to show itself. But rest assured, if your hope is in Jesus, amazing things are coming.

Adoptive dad Jacob recently shared how God worked in the adoption of their son. He shared this letter with the Lifesong team…

The adoption experience has been amazing.

Living it has been so eye-opening and life-changing. It feels like I am being pulled along on some journey… I don’t know where it leads, but I know it is going to be amazing (and it already has been).

My wife, Katie, had wanted to adopt a child since she was a teenager when she took a mission trip to a group home in Mexico. From that point, she knew that adoption was something she needed to do.

Nearly 20 years later, we set out to make that dream a reality. God clearly laid out our first two major decisions.

First, because our town is home to a large Spanish-speaking community, we would adopt from Colombia through the agency HOLT International. Second, because Katie worked as a teacher of the deaf and hard of hearing, we felt called to search for a child with hearing loss.

We continued on in the process, finalizing our home study and sending our dossier to Colombia.

We were discouraged when our agency reported they’d not been able to find a child with hearing loss in our age range (0-4).

But a month or so later, Katie saw an adorable 18-month-old boy—Martin—who had just been added to our agency’s website. He caught our attention, so we asked about him and received paperwork right away. He had some serious medical needs, but we were expecting that.

Meanwhile, we heard from our adoption agency that there were a couple of other families interested in him. They told us they were sending our dossier to Colombia right away because they felt like we were a good fit. If we were interested, we needed to send a Letter of Intent by the weekend. We prayed hard and felt God was telling us this was our kid, so we sent the letter and hoped for the best.

I was out of town for work the next week, but Katie and I were able to conference call with our adoption agency. She gave us the best news we could ever get. We had been matched with our new son Martin!

I cried outside my office building in Denver on the phone with my wife.

It was just so unbelievable how the timing all worked out. Our dossier wasn’t even in Colombia yet, and Martin had just come on the photo listing. If either had happened a few days different the story could be very different today.

We traveled to Colombia in October 2019, taking along our two bio children and were united with Martin on day three of the three-week trip. We returned home right before Halloween. Bogota, Colombia consistently has 60-degree temps all year round, so Martin had a cold introduction to CO as we tricker-treated him up and down our street on the second day home. 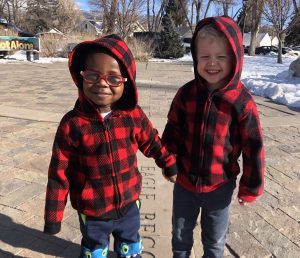 Chance Had Nothing to Do with It

We noticed right away in Bogota that he had no language skills. He wasn’t speaking at all at 25 months old. After multiple appointments with a children’s audiologist, Martin was diagnosed with severe hearing loss.

Most often, this diagnosis means a major change in lifestyle for a family—learning sign language and additional medical expenses being only a couple of factors. But this is what we’d been prepared for from the beginning! We had felt, because of Katie’s job, we were uniquely equipped to love a child with hearing loss. We were still in a bit of shock though… what are the chances the cards fell just like that?

Well, chance had nothing to do with it. God knew we were the right parents for Martin. All the little things that had been frustrating suddenly made sense. They seemed more like points along the way that had to happen so God’s timing would fall in place exactly as he needed it so we could end up with our son.

The biggest gift Lifesong gave us was the matching grant and the tools to raise the matching funds through the MyStory platform.

Money can be such a big part of the adoption journey. We’ve talked to many people about adoption who say, “We thought about international adoption, but it’s so expensive.”

We quickly chime in that, yes, the money was somewhat stressful. But God was in charge of the finances just like everything else, and we watched Him plow a path for us. We thank you for allowing God to work through you to help make our family whole!

Thank you so much for the role you played in our adoption. God truly worked through you to create something amazing, and we learn more each day just how perfect His plan is for our family. Thanks for being a part of His plan.

READY TO TAKE THE NEXT STEP IN YOUR ADOPTION JOURNEY?