We can always find excuses to avoid acting on God’s will for our lives.

Be it comfort, money, time… But God has a way of showing us the flaws in our excuses when they go against His better plans. The following testimony is from an adoptive family who brought their son home with the help of a Lifesong matching grant. They learned to choose faith over fear as God led them through 2 adoptions.

Our third and last biological child was born in 2010.

At that point in our lives, we felt as though we were finished having children. We were ready to enjoy watching them grow up. And we were making plans–big plans–for what we could accomplish in our lives. At the top of our list was a big house with a pool, new cars, fun vacations, and all that the American Dream could provide.

A Change of Heart

In 2012, I stumbled across the blog of a former high school friend. His family was in the process of adopting his little girl from Ethiopia. I followed along as they shared information and details of their process, amazed at the idea of bringing a child from across the world into their family.

I began researching. It soon turned out that not a day went by where adoption wasn’t on my heart and in my mind. I started talking about it with my husband. At that point, he wasn’t sure how we would afford the process or even if we had time. Our schedules were already packed. How would we meet the needs of our biological children plus an adopted child, who would obviously have different needs than our current children?

A Son from China

We began praying. I would say we prayed for at least six months that the Lord would show us if this was His will for our family. We knew bringing in another child would change our paths in many ways. It would require us to possibly let go of some of our worldly dreams in order to provide for every need.

In early 2013, we began our home study to adopt from Ethiopia. In October of 2013, the process in Ethiopia slowed down dramatically. We ultimately decided to switch programs after finding our son on a waiting list in China. We brought him home in November of 2014 and began adapting our family to care for him.

The process was hard and required a lot of sacrifice from everyone in our family. But we found joy in knowing we were following God’s will for our family.

The next couple of years found us trying to manage two jobs and four children with all of their activities, along with multiple doctor appointments for our newly adopted child. But throughout all of it, we felt as though the Lord was laying on our hearts that we weren’t finished. There was more for us to do.

We looked at the files of multiple children, but we knew realistically that we needed to find a child whose known medical needs fit into what we could handle with everything else on our plates. We were mainly looking at China since we already had a son from there. 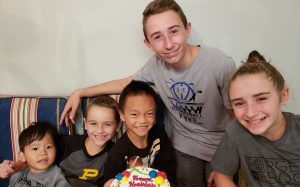 Saying YES for the Second Time

However, in July of 2017, I saw a video of a precious little boy from Korea who had the exact same need as our first adopted son. This meant connections for doctors, therapies, and such were already established. This time it didn’t take much convincing for my husband to say yes! We started the process immediately, though we were scared to death about how we would afford it all.

We began praying, but in my heart I knew that if this was God’s will, he would provide for us. Just as he did in our first adoption.

We flew through the process and traveled to meet our son in June of 2018. He came home one month later. Here we are, six months later, and we absolutely cannot imagine our lives without our son.

We have been so blessed by the Lord’s provision throughout our adoptions, specifically financially. As two school teachers, there was no way we could do this on our own. The Lord enabled us to sell our home at just the right time to use the equity to help fund the adoption. He also provided through a Both Hands project and wonderful organizations such as Show Hope, Lifesong, and the Tim Tebow Foundation. Without these organizations, we wouldn’t have been able to bring our son home. Our family looks forward to serving and giving back to others in their adoptions the way that these groups so selflessly gave to us.

Shane & Kelly, thank you for sharing your story. It’s an encouraging reminder to loosen our grip on life and seek out the good plans God has for us. We pray that God blesses your busy schedules as your family seeks to bring Him glory.