Many families deal with the harsh reality of infertility.

And for these families, adoption can feel like Plan B. Such was the case for Andrew and Bonnie. But a word from God led to a shift in their perspective. The following is Bonnie’s testimony.

My husband Andrew and I were in the midst of grief.

We had been trying to have a child biologically for almost 4 years. God had already given each of us the name for a son–Aiden–at the beginning of our journey. But despite natural family planning, 2 laser laparoscopic surgeries for endometriosis, 4 intrauterine inseminations, and 1 miscarriage, we had not been able to have a child.

Someone at my church told me, “It is the Lord who opens and closes the womb.” I knew she was speaking of God’s sovereignty and that He is in control, but I felt hurt and frustrated. Why would God close my womb? Some people would say, “You can always adopt.”

I had thought about adopting one day, but I had planned to have “my own” children first. I had always wanted to be pregnant. And I really wanted a son that looked just like Andrew.

Then God closed the door on any further fertility treatments. My body wasn’t cooperating anymore—I had a cyst on my ovary and a fibroid in my uterus—and we ran out of money.

I was at my lowest point, and I knew I had to surrender my plans, and lay them down on the altar. I felt convicted by the Holy Spirit. Was my desire really to be a parent, or did it have to include passing on our genes?

I decided that my desire, most of all, was to be a parent.

So we started the adoption process.

In the beginning, it felt like Plan B. It felt like it was going to be just a consolation prize.

But then I got connected with a woman named Grace who had adopted two of her children. We were speaking on the phone when she shared with me a vision that God had given her. He told her that He purposefully closes the wombs of some of His chosen ones so that they will adopt and rescue His lost children.

When she said those words, I knew God was speaking to me. He did close my womb, but He had a purpose for me and had chosen me for something special.

Suddenly, adoption didn’t sound like Plan B anymore to me. It was God’s plan all along for my family. 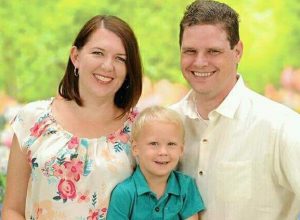 There was still the issue of money.

How were we going to afford adoption? We found out about Lifesong for Orphans and received assistance with fundraising. We sent letters to friends and family, and over $11,000 in donations came in!

5 ½ years after starting our journey to have a child, we received the gift of our son Aiden. We felt we had been waiting so long, but in the end, we got in touch with a Christian adoption lawyer that a friend knew. And 1 day later, our son was born! The adoption ended up costing only $12,000. God did provide all that we needed.

Our son Aiden’s name means “little fire,” and the date of his birth was the 4th of July. He is our little firecracker! We are so blessed to be chosen by God to be his parents and to have the joy of seeing how God will use Aiden for His plans and purposes!

READY TO TAKE THE NEXT STEP IN YOUR ADOPTION JOURNEY?